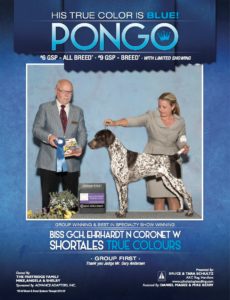 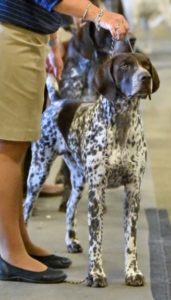 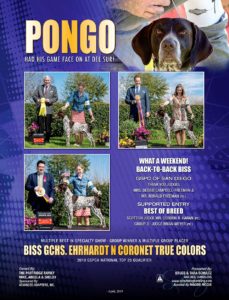 Pongo introduced us into the fascinating world of dog showing.  The very first show we attended was 2015 Woofstock in Vallajo CA, and we had no idea what to expect.  This was the first time meeting the breeders behind the bloodlines we’ve had for 12 years. Reflecting on that time, we never could have imagined that a dog could forge so many close bonds.  We count ourselves very lucky to have been welcomed into their dog family along with so many other positive connections made.

Pongo is a great nephew of our first GSPs Tuscan & Wyatt.   He got his unusual 101 Dalmations name from his 'sissy' Shelby because of a spotted coat!  Pongo and Wyatt shared similar patchwork and were an inseparable pair.  Even though his uncle Wifi showed him the ropes around home and work (which included drawing blood at times), Pongo blazed his own roads, romping around the office or waiting at the warehouse door for his shop buddies to come in for lunch. 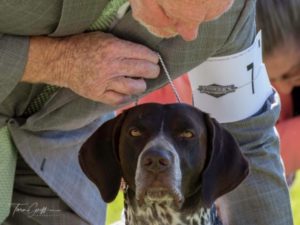 In March 2017, Pongo became a Champion at the Del Sur Friday Morning & Afternoon Specialties - Bates Nut Farm, Valley Center CA!   It had only been two weeks after the loss of Wyatt and he seemed depressed going into that show; however, a spark started the fire under him and he was unstoppable the rest of the weekend.  The next day (Saturday) he went on to win Best of Breed and Sporting Group and was up for a shot at Best of Show.  The next day he won Select Dog - putting him a 1/3rd of the way to his Grand Champion status.  What better way to honor his uncle Wifi and lift our spirits! 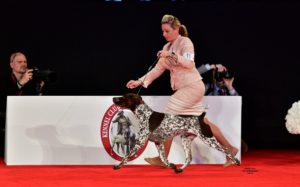 Pongo has been a versatile star.  With Camp Schultz, he reached Grand Champion status in October 2017, Bronze Grand Champion by April 2018, and Silver Grand Champion on December 3, 2018.  Being a breeder-judge favorite, Pongo has won multiple Best in Specialty Shows, Best of Breed and Group placements, ranking him 12th Breed, 15th All Breed in the 2018 National standings - all with limited showing!

It's important to take the time to thank so many that have helped him grow along the way.   Firstly, thank you to all the judges who have noticed him and were instrumental to getting his Champion & Grand Champion titles.  Secondly, to all that have shown him (please forgive us if we’ve forgotten to mention you):

When not showing, Pongo the avid hunter spends his day looking for anything that moves!

A good read for those interested in one of nature’s best health boosters. Also provided a source from the book. Definitely adding to our regimen of prevention, even for the dogs!

Share on FacebookShare on TwitterShare on Linked InShare by Email