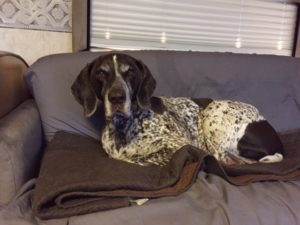 Wyatt joined his brother Tuscan and the AA dog crew in early 2006 and brought the ‘play’ back into the home & office.  At age 3, he unfortunately came down with Valley Fever and pneumonia and was pretty sick for about 6 months.  After his recovery, that traumatic experience brought on fear/protective issues and he ended up taking on the roll as Guard Dog/Door Bell Barker.  Any visitor had to use caution if barking was heard, but with treats and trust on his terms he proved to be a good, loyal boy.  His multiple markings included a butt patch and a distinguishable figure 8 on his side.  Like his brother Tuscan, his pastime was hunting squirrels and lizards, napping & snacking.

Wyatt aka "Wifi" passed away peacefully in the early morning hours of March 3, 2017.  As one of the original home & shop anchors, he graciously accepted other newbies to the AA dog crew, loved Shelby from the start when she joined the family, and later when as senior allowed Pongo in the fold.  The highlight of his senior 'pup' years was going into the show ring for the first time and placing 3rd overall in Veterans - boy did he soak up the applause!  Often underestimated because of his protective nature, he really was a sweet soul that has made an indelible mark on our hearts.  RIP big-hearted boy.  We will miss you, your bark, and snack buddy nature everyday!