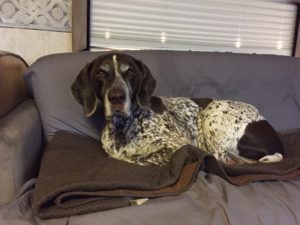 9/27/05 - 3/3/17:  Sarakraut Wyatt Warp Coronet aka "Wifi"  passed away peacefully in the early morning hours of March 3rd.  He was one of our anchors through our second baby loss IN 2006; and in our first harvest year in 2012 when we had Shelby (our later in life surprise), he welcomed her and loved her from the start.  After the loss of Tuscan back in June of 2014, Wifi proudly became Mike's #1 boy; and when Pongo entered the home he graciously accepted his new nephew.  The highlight of his senior 'pup' years was showing him in the ring for the first time placing 3rd overall in Veterans - boy did he soak up the applause!

Often underestimated because of his protective nature, he really was a sweet soul that has made an indelible mark on our hearts.  We will miss you around the home, the workplace & olive grove.  Rest in peace our beloved best buddy. 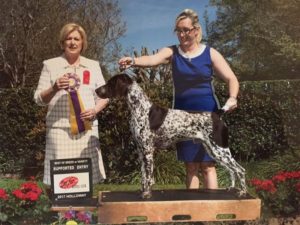 It had only been two weeks after the loss of his uncle Wifi and he seemed depressed going into the show; however, a spark started the fire under him and he was unstoppable the rest of the weekend.  On Saturday he went on to win Best of Breed and the Sporting Group and was up for Best of Show; then on Sunday he won Select Dog - well on his way to his Grand Champion status!

We all feel he did this all to honor his uncle Wifi!  This was what we needed to really lifted our spirits, and it couldn't have come at a better time! 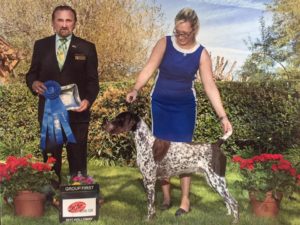 When not showing, you will find him zooming in and around the olive trees looking for squirrels or anything that moves - a true hunters spirit and trained by his best uncle!