After a scorching July and a relatively mild August, the olives have been dark green and steadily growing. Now that another heat wave is upon us, we have spotted color changes starting to take place in the grove!  What exactly causes the olives to turn purple you may wonder? 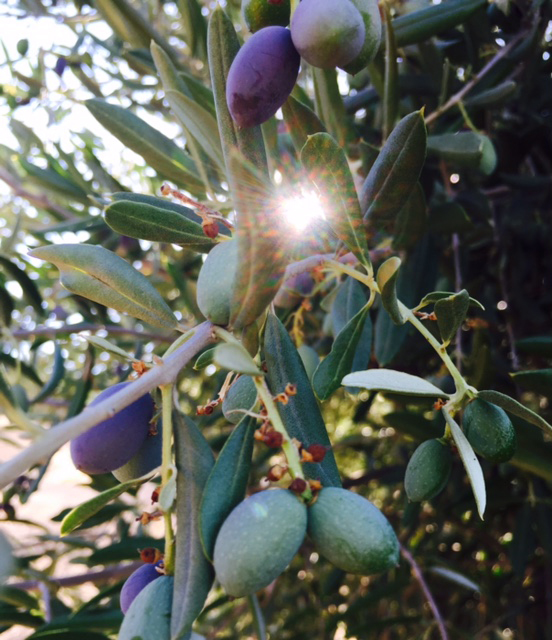 Well, change of color is due to an accumulation of anthocyanin—the naturally occurring pigment that puts the purple in Concord grapes. Foods & plants that are rich in anthocyanins also include blueberries, cherries, red cabbage, tomatoes and, of course, naturally ripened olives - just to name a few. This even includes grains such as black rice and flowers such as blue poppies. It is also responsible for some of the colors of a beautiful autumn.

Anthocyanins are produced as a protective cell mechanism against environmental stressors & changes such as UV radiation.  They belong to the visible members of the flavonoid group of phytochemicals. These powerful components are believe to act as antioxidants. Although Anthocyanin pigments and associated flavonoids have demonstrated anti-inflammatory ability and disease fighting benefits, ongoing research is continuing.

So when your mother told you to eat your colorful fruits and vegetables, she may have been on to something. Now that just makes it that much better when you add a dash of Partridge Family EVOO!